A brass sundial is an awesome toy, and when my friends gave me one for my birthday (well, a couple months later, but with online orders you never can tell) I was elated. My sundial comes in an elegant wooden box, it features a compass for correct north-south alignment, and it has an elevation scale that makes it work at all latitudes from the equator to 60° North. I have never moved beyond these boundaries, so I am perfectly happy with that kind of limitations.

There are, however, some limitations I'm unhappy with. Not unlike GPS, a sundial doesn't work inside a building; and since I'm not a sailor, but rather a sort of office crawler, I'm afraid that a sundial's utility is greatly impaired by my lifestyle.

Notwithstanding this problem, I could not let that piece of human ingenuity become a simple ornament.

Nowadays, the circadian cycle imposed by the sun's (apparent) motion has a lesser impact on the human life than it had, say, a few centuries ago. This is mostly due to the introduction of affordable lighting devices, from Edison's lightbulb to the newest high-power LEDs.

Unfortunately, light is only half game for a sundial. Not only does it need light for its gnomon to cast a shadow on the time scale: the light also needs to move in a very precise pattern, lest the shadow be completely unrelated to the actual time of the day. My office, for instance, has two fluorescent tubes on the roof, and one of them is lively enough to actually flash some light from time to time. However, no matter how long and intensely I look at those tubes, or conversely pretend to ignore them for quite a long time and suddenly stare at them, I never see them in different positions; therefore, I can say positively and definitively that they don't move.

Having my office's lights mimick the sun's motion is impractical (memo to self: prepare patent application for said device), however one needs not always think at a large scale. Why not make a small lamp rotate around the sundial? Think of the many problems that it would solve:

On a second thought, that's precisely what a modern clock does, but let's not be distracted by needless details.

How can we have a light rotate around the sundial at moderate cost? I started considering the use of a stepping motor driven by an Arduino board. To make the device really cool, the Arduino board could in turn connect to an NTP server to automatically retrieve the correct time and adjust the lamp position accordingly. All would be achieved at moderate cost (I have some spare stepping motors from dead printers and scanners, and a spare Arduino board, plus some spare electronics to put the two together), but it would require some time, which I'd rather prefer to use in some other way (sleep).

Therefore, I stuck with the Occam's Razor: entia non sunt multiplicanda praeter necessitatem (translation: never use a microprocessor when duct tape and steel wire can do the job). I restricted my material list to: 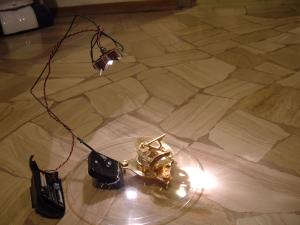 I think that the above list makes everything clear: my aim is to use the clock mechanics, in particular the hours hand, to move the flashlight around the sundial. In order to work, however, some trial and error is needed, and everything must be reduced to minimum weight. I had to remove the clock's mechanics (a small box behind it). The flashlight, too, had to meet a sad fate when I took out its lamp and the small parabolic mirror behind it. Some wireframe to connect the lamp and its mirror to the hours hand, some electrical wire to power the lamp, and I was done, as you can see in the right picture.

In the image, I used the clock's transparent cover to keep the mechanics and the sundial in place through some very rough cuts. After an overwhelmingly tiresome adjustment session (the clock needs go much slower than usual), I could declare myself satisfied and go to sleep. The picture at the top of this page shows the sundial with an artificial shadow at about 1:30 (am or pm, your choice).

According to the opinion of a striking majority of scientists, at least among those who lived since the scientific method was defined, the motion of the Sun across the Earth's sky is apparent, and is mainly due to the Earth's motion itself. Therefore, the assertion that the sundial works because the sun moves around it is inaccurate and misleading. What really happens is that the sun is fixed (well, not really, for most astronomical calculation purposes we can pretend it is), and the sundial revolves. 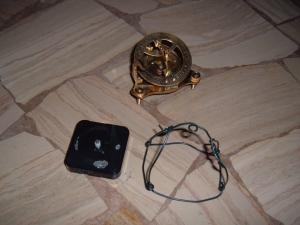 I felt thus compelled to modify my system in order to accommodate for a fixed light and a rotating sundial. This choice simplifies the design, in that we don't need a moving lamp anymore. The three components used are shown in the left picture: a wireframe stand with a loop on its top to grip the hours hub on the clockwork; the clockwork itself; the sundial. 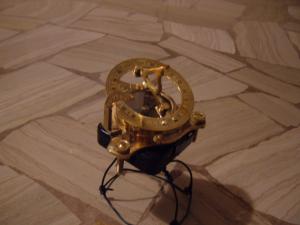 The idea is to keep the hours hub firmly connected to the wireframe stand; the whole clockwork will therefore rotate, and can be used as a base for the sundial, as shown in the right picture.

The problem with this setting is that, in order to obtain the correct time readings, the sundial (which is built for the Northern hemisphere) expects a clockwise light source, therefore it ought to rotate counterclockwise. Although a backward-moving clock has a certain appeal, having the correct time reading is often deemed important. The following solutions apply, in strict preference order:

A second order of problems is due to the fact that the system does not correctly simulate the sundial's motion. To do so, its rotation axis should be perpendicular to the light direction, and the sundial's base should have an inclination ranging from perpendicular to 30°... Too hard to achieve without another fundamental component, which I have not: two-sided adhesive tape. I will therefore content myself with a device that, if properly arranged, is able to tell a morning from an afternoon.